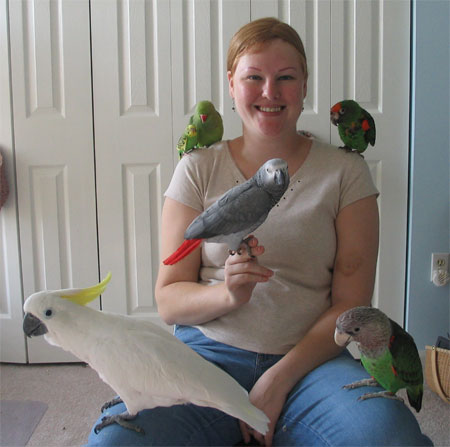 His mommy wrote: Ayodele the un-cape parrot. (poicephalus robustus fuscicollis) Ayo came to me because his mommy could no longer care for him anymore in the way she wanted. He is 2.5 years old. You can tell too because his eyes are full of mischief. He loves foot toys and having his beak scratched. He squeals in delight making noises that sound like robots and/or dog squeaky toys! He also likes his beak rubbed by feet (weird I know!) and loves to hide in his jolly ball. He is a big wrecking ball and just plows around, knocking the other birds off from their perches if he wants to sit there. He is my big boy!!

Lemon and Limon the budgies. (melopsittacus undulatus) Before there was Limon, there was Lemon. Lemon and Pistachio were deeply in love. Then on April 24th 2004 I took Ava’s cage outside on my deck to clean it and Lemon escaped. It was a very sad day for Pistachio and I. Earlier on that very same day I also found out that my Jardine had cancer. I have been placing ads in the paper ever since and have been praying. A girl saw my ad in the paper and gave me her parakeet her dad gave her. She already had a parakeet and didn’t want another. So I named this parakeet Limon, in Lemon’s honor because Limon has more green than yellow. Pistachio and Limon are slowly but surely becoming best friends.

This is Ayodele, the Cape parrot or poicephalus robustus fuscicollis. 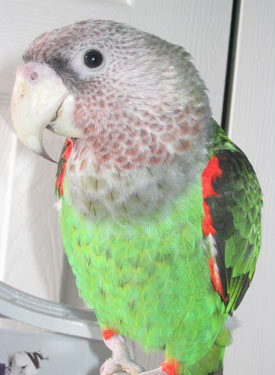 Charlie the Jardine. (poicephalus gulielmi) Charlie came to me as a rescue bird. I have no idea how old she is. She has never had a tail and is very scared of everyone but her mommy. She jumps off of anything to get down or get away from strangers. That is why her tail follicles are destroyed so she will never grow a tail my vet said. She loves Jelly Belly jelly beans and must always be on mommy’s shoulder. She sleeps in a happy haven which is like a dome tent for birds on a tray table next to my bed. She wakes me up in the morning by coming across the bed and getting next to my face and saying “Good Morryour yourning!” I found out in April that Charlie has squamous cell carcinoma of the beak and cere. We are going through chemo treatments at this time in hopes that it will stop the cancer. She now only has one nare to breathe out of. She is my baby and is my most affectionate fid in my flock. I love her so terribly much and am so afraid to lose her. 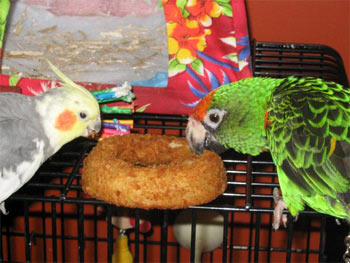 Ava the Triton cockatoo. (cacatua galerita triton) I got Ava from a breeder when she was 6 months old. She is now 14. Her favorite food is a chicken drumstick! She loves to eat the marrow out! She loves to be turned upside down and swung by my boyfriend Chris. She loves him very much and is now bonded to him. She sleeps on the end of our sleigh bed and when the sunlight creeps into our room, she sleeps on the pillow next to Chris’ head. She is an expert stair climber and loves to scream to get her way!

On the picture below Ava is enjoying an onion ring.
(Note that the onion rings you can see on these page, were a special treat! They didn't eat the whole piece by the way!!!) 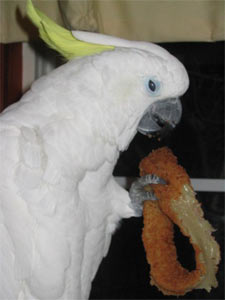 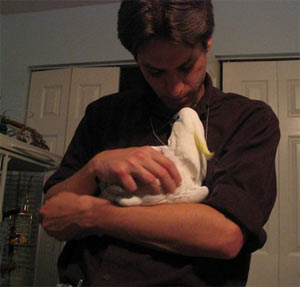 Ashley the CAG. (psittacus erithacus) Ashley is a rescue bird. I call her Asharee since I think it is silly to name birds’ people names! She is somewhere between 10 and 15 years old as good as I can guess. She scolds Ava when she screams saying “No Ava! Bad bird, Quiet..shhhhhh” so we don’t have to even scold Ava any more!! She LOVES all bathrooms and guards and defends them. I am the only one that can go in a bathroom when she is in it. She sleeps/plays in the master bathroom’s vanity cabinet. She is also an accomplished stair climber and follows her mommy throughout the house. She must have had a bad experience with men because she hates Chris and all men and when she first came to my house all she said was “shut up! Knock it off! Go to bed!” So I am very glad she doesn’t say those things anymore—just sweet things.

On the photo below you can see Ashley eating some food of her mom's plate.. 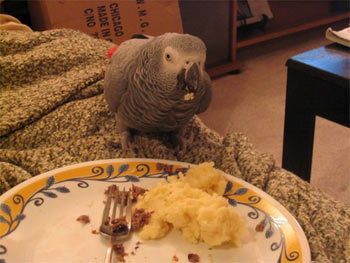 On the next photo Ashley is having a bite of an onion ring. She didn't eat the whole of it! 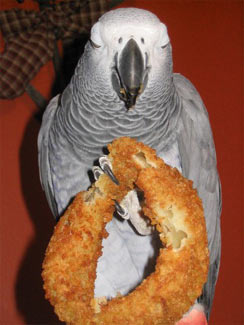 Pistachio the Indian Ringneck. (psittacula krameri) Pistachio came to me as another rescue. Supposedly she bit too much. That is so untrue! She is somewhere between 10 and 15 also I am guessing. She LOVES to be kissed and her head stroked and when you do this her little pupils pin and she emits this small little squeak of ecstasy. Even though she is small, she is the biggest bully in my flock. She loves to drink out of my cup and hang out with her best pal Limon.

Coco and BB, the foster cockatiels. (nymphicus hollandicus) I volunteer for Phoenix Landing a great non profit parrot rescue/welfare agency and am one of their foster moms. Coco and BB came to me in awful shape from 2 different homes who didn’t want them any longer (how selfish of them). They both just ate sunflower seeds and BB had a gigantic scissor beak, smelled terrible and had greasy feathers. Luckily Coco was in better shape. After fostering them for 3 months I converted them over to pellets and BB’s scissor beak fell off on its own! She went through a complete molt and gained 15 grams! They now live with their adoptive mom in VA. 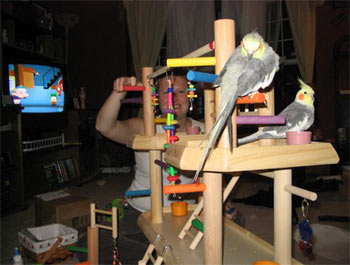 If you'd like to send Brandie an email, please use this email address: bfullmer1@yahoo.com

Note that you can now make your own website on the www.fluffies.org interactive site.
The only thing you need to do is to register to start making your own parrot(s)' site!
Just follow this link..